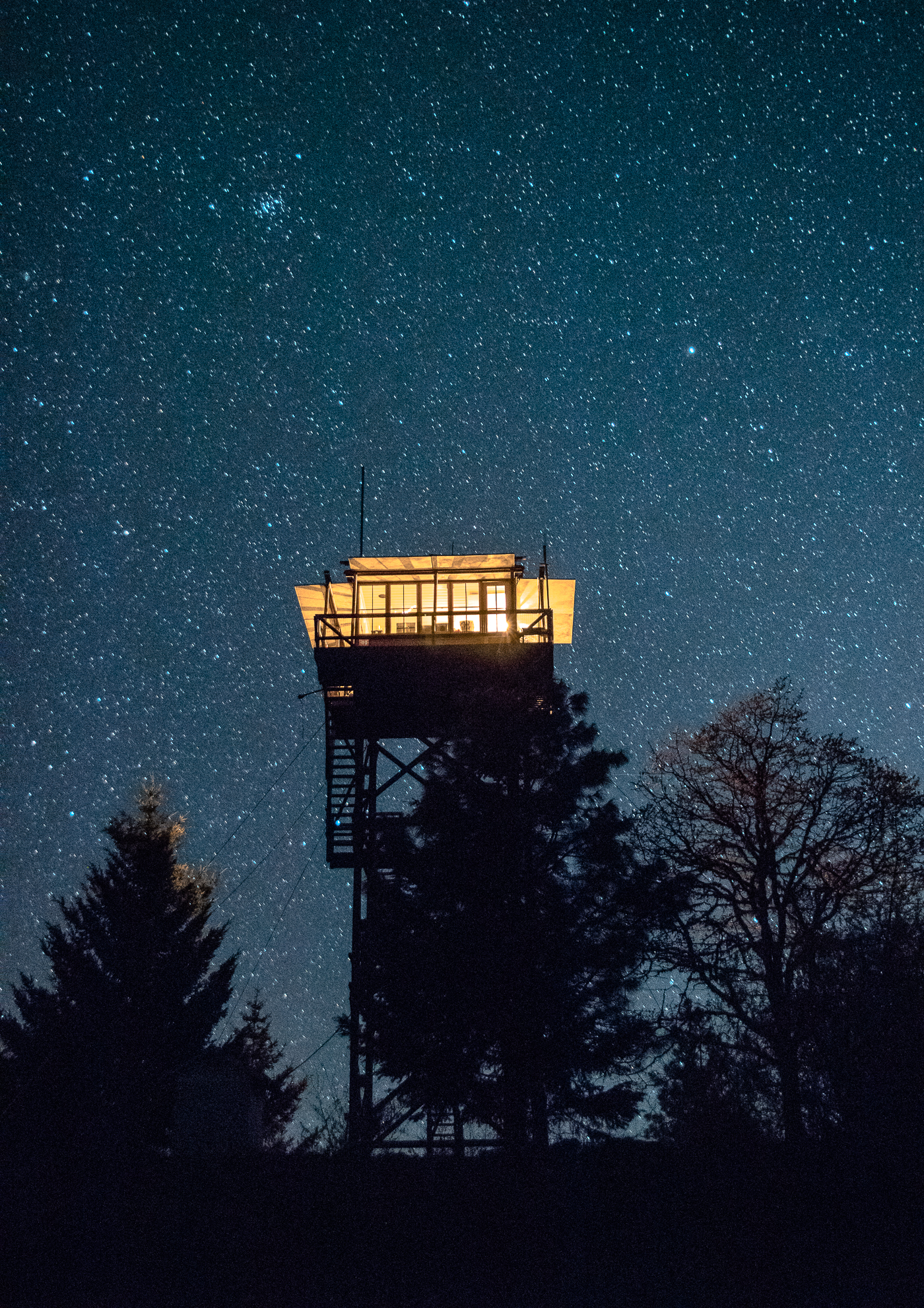 On a quiet Thursday afternoon at the beginning of February, we found ourselves slowly winding our way up a dirt logging road in the dark and damp Umpqua National Forest. Following some loose directions printed offline, I pushed in the code that released the lock and we passed through the large metal gate, navigating the last half mile up the muddy drive into a clearing. The fire tower, and our home for the night, came into view as we crested the hill in Krista’s Honda Element. 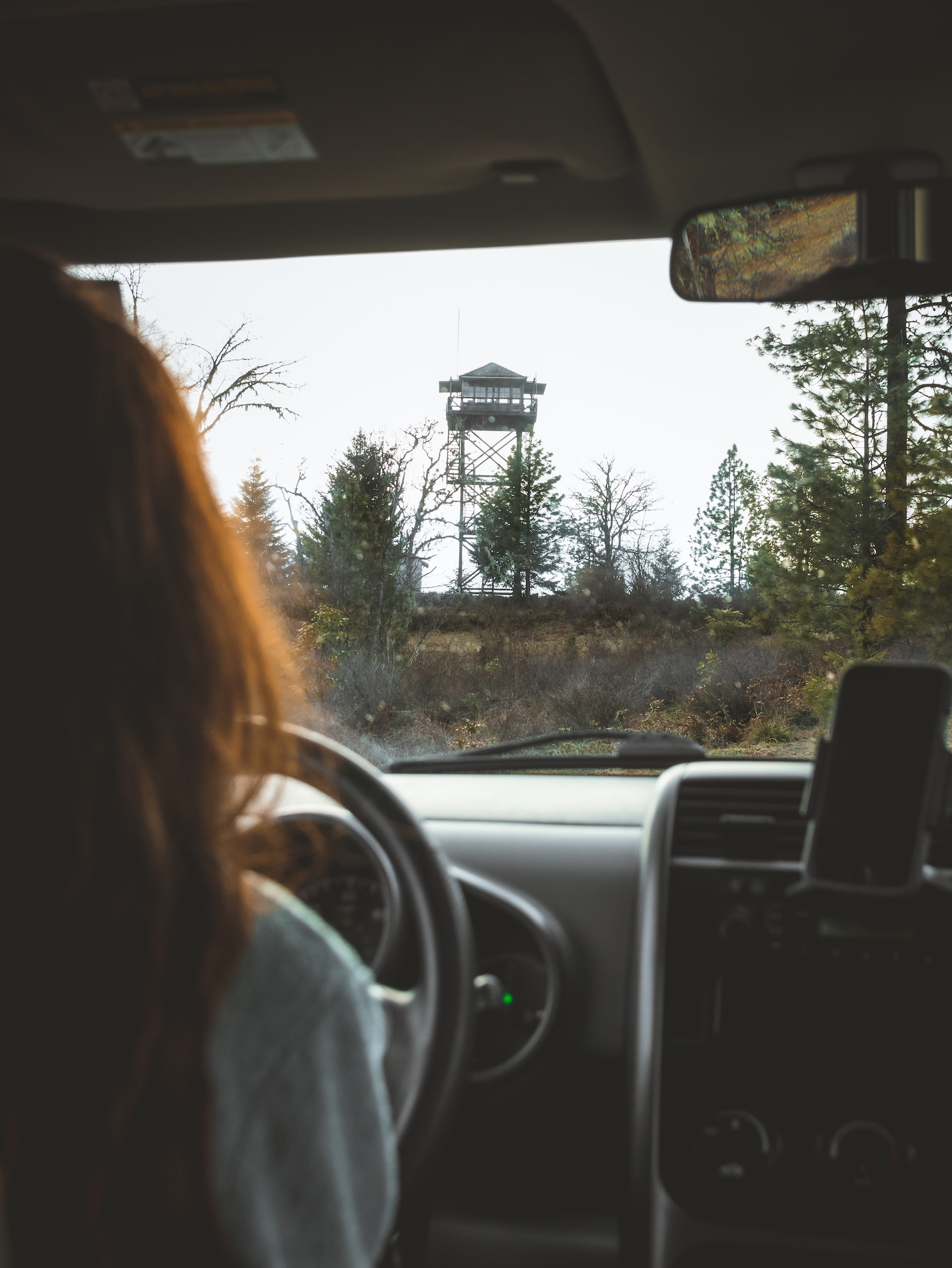 We were fortunate enough to arrive just a few short days after the most recent snow cover had melted, making the road passable all the way to the base of the tower. In the winter, they don’t plow the road, occasionally forcing some guests to snowshoe to the hut. Just as we arrived, the sun started to peek through the clouds to welcome us. The temperature was toasty compared to Portland, and after hauling our supplies several times up the steep 40 ft of stairs, we were hot enough to hang around in our t-shirts. We busted open our snacks, cracked our cans of Underwood Pinot Noir and settled in for some relaxation; ie. guest book reading and dog snuggles. 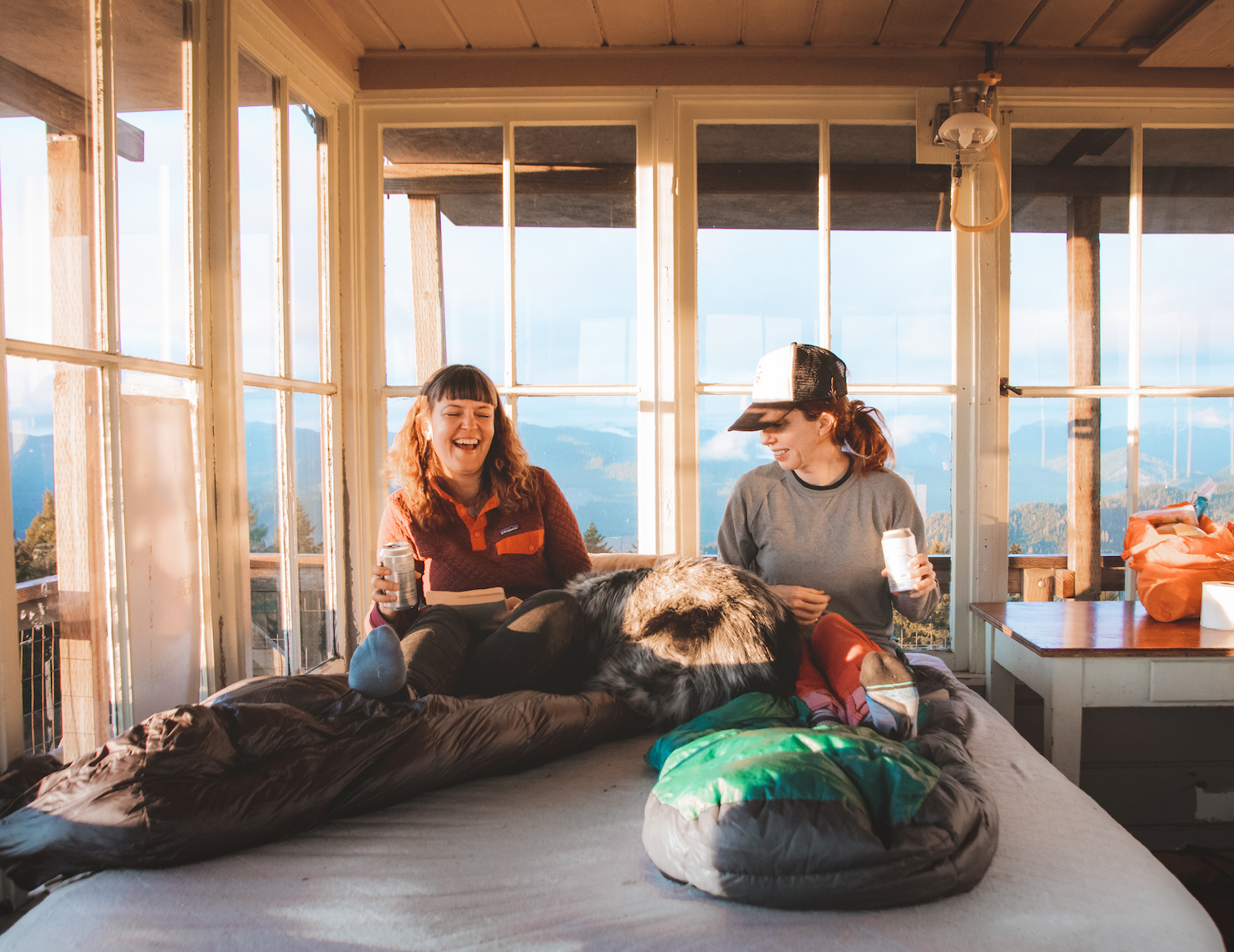 Pickett Butte, rebuilt in 1958, is one of many reservable fire lookouts in the PNW. Along with thousands of other lookouts, it was built in the early 1900’s after a fire swept through Washington, Idaho, and Montana, burning over 3 million acres. The government’s solution was to hire folks to inhabit these lookout towers during the driest seasons of the year, monitoring weather patterns and forest activity. Although many have since then burned down or decommissioned, some are still used for fire surveillance to this day. During the off-season, many structures become rentable to the general public. But reservations are often hard to come by. So, if you’re lucky enough to land one, make sure you take advantage of a unique opportunity to stay above the clouds with 360 views.

When the light started to fade on us, the temperature dropped and the sky turned pretty shades of pink and orange. We pulled on our puffy coats and stepped out onto the deck to silently watch the show, wine in hand. The peaceful sounds of the wind and the forest were all we could hear.

The rest of the night was spent cooking Indian food—the smells of warm spices filling the tiny 14×14’ room—playing games, drinking Underwood Wine and catching up as the propane heater warmed us and the clouds hung low over the horizon. 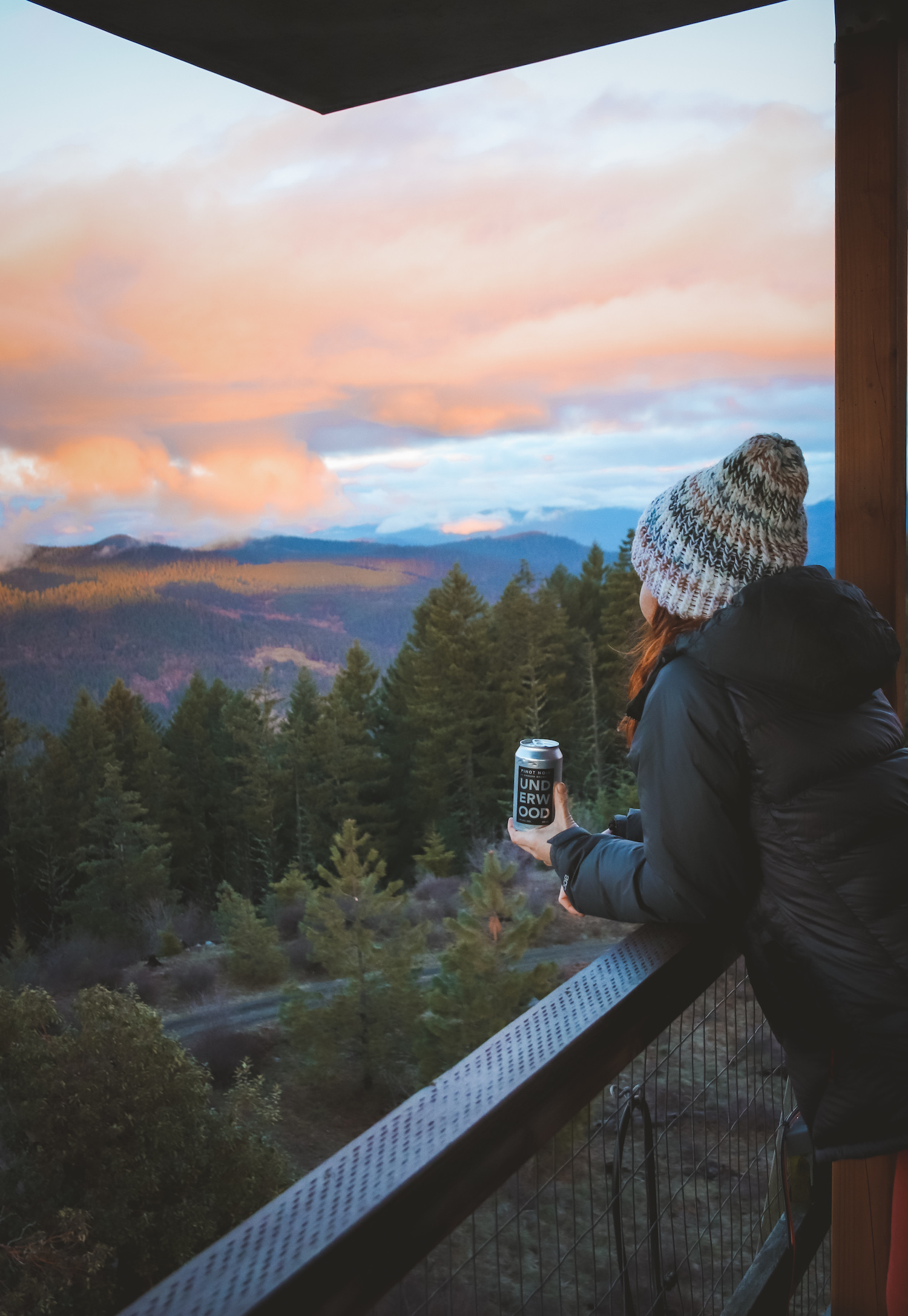 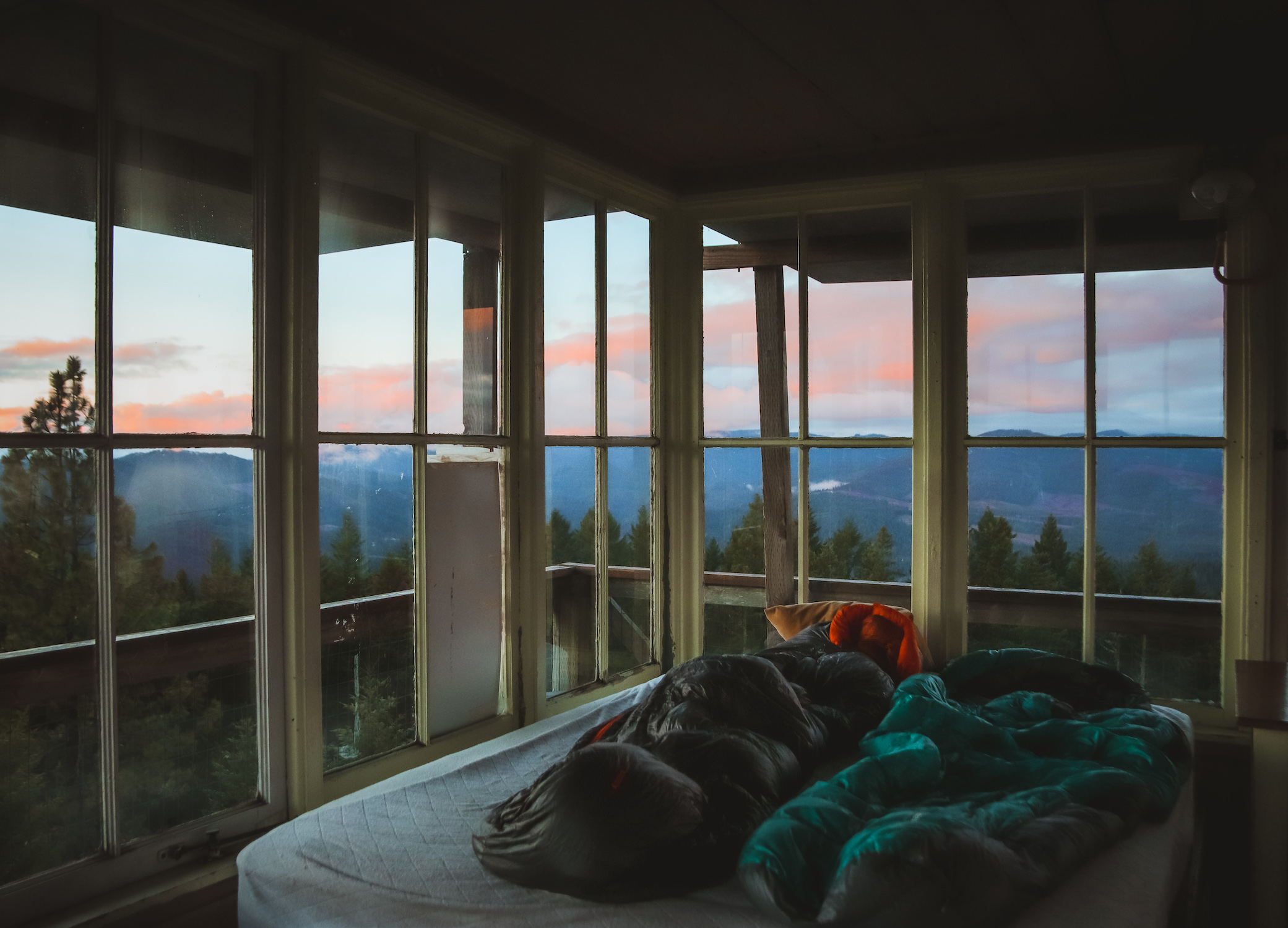 When we woke up at first light the next morning, we were magically perched inside a cloud. What an unreal feeling to be engulfed in this damp, white fog, the trees of the forest looking ghost-like just feet away. Slow to rise and make coffee, not wanting to eject ourselves from our sleeping bags, we took full advantage of a chance to be extra lazy in our cozy cabin in the sky. 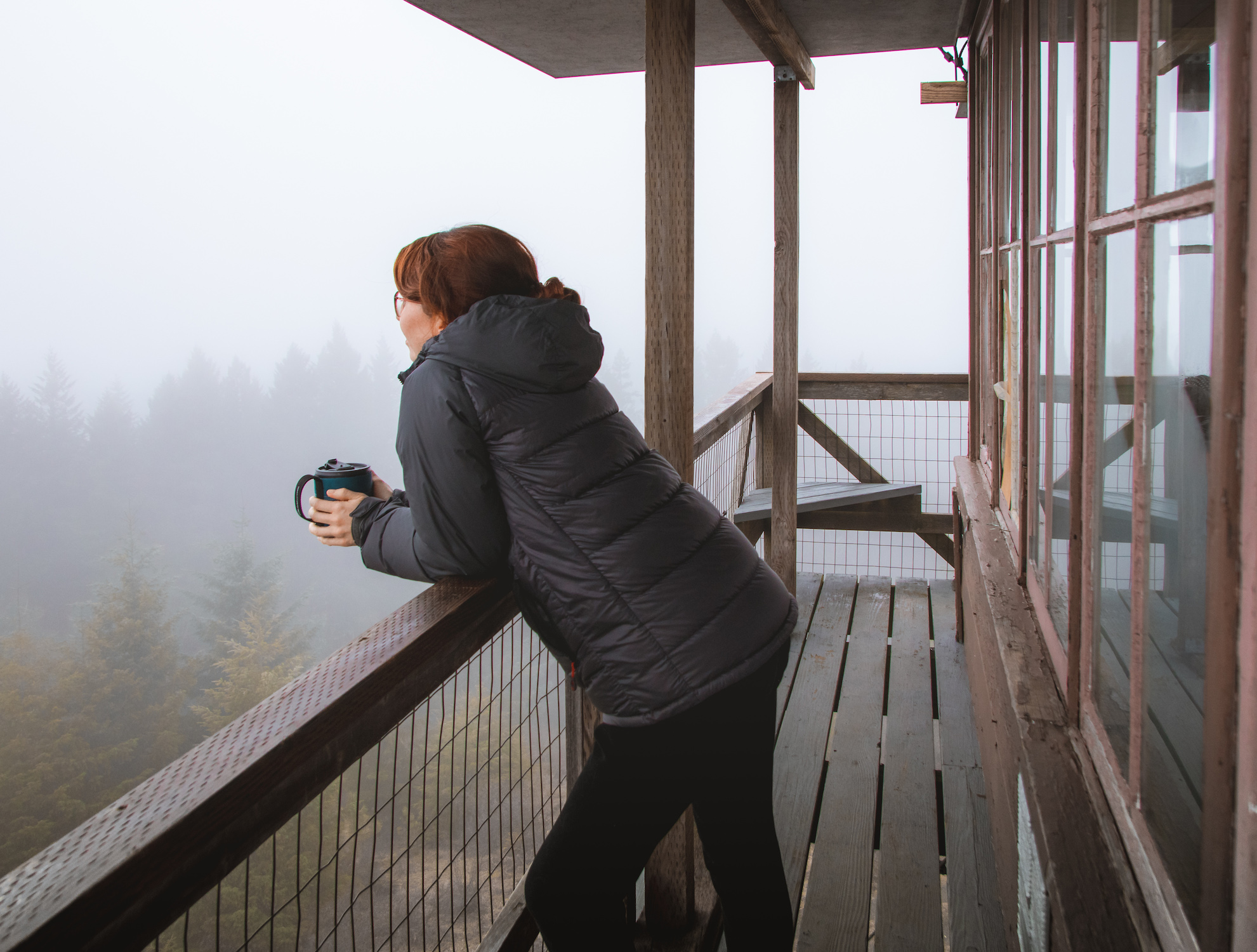 Eventually, thoughts of the long trek home drove us out of our beds and into action. Using the basket and pulley system rigged on the catwalk, we lowered our belongings back to solid ground, packed up the car and waved goodbye to our little home on stilts, grateful for the opportunity to step away from civilization and experience this small sliver of history.

Words and Photography by Brooke Weeber.