First things first. Keep your distance, wash your hands, and wear your mask. Please and thanks. That being said, for those who love the outdoors, (like most of us here at UWCo), there are still plenty of ways to get outside and recreate responsibly. Join us as we follow one of our winemakers, Cheney Vidrine, to do just that. We explore the activities that many Oregonians know and love. From going vert at Smith Rock, to cooling off in the rapids of the Deschutes River. Then, letting gravity take us home, mountain biking from Timberline Lodge to Government Camp. Get ready, it’s going to be a wild ride.

6:30 am. Saturday morning. Terrebonne, OR. The parking lot at the trailhead of Smith Rock State Park looks something like an REI yard sale. Climbers slowly unloading all kinds of devices for ascending the 30 million-year-old volcanic Tuff formations. Counting each glimmering piece of gear with precise selection. Through the morning light, a familiar face (after he removes his mask) makes an appearance. Our very own Cheney Vidrine. As he makes his way past the cars greeting folks left and right, I wave a hand. We exchange greetings and go over the plan for the next few days. Listing off activities such as river rafting and downhill mountain biking as calmly as someone would explain a walk through a park. It is obvious Cheney is in his element. 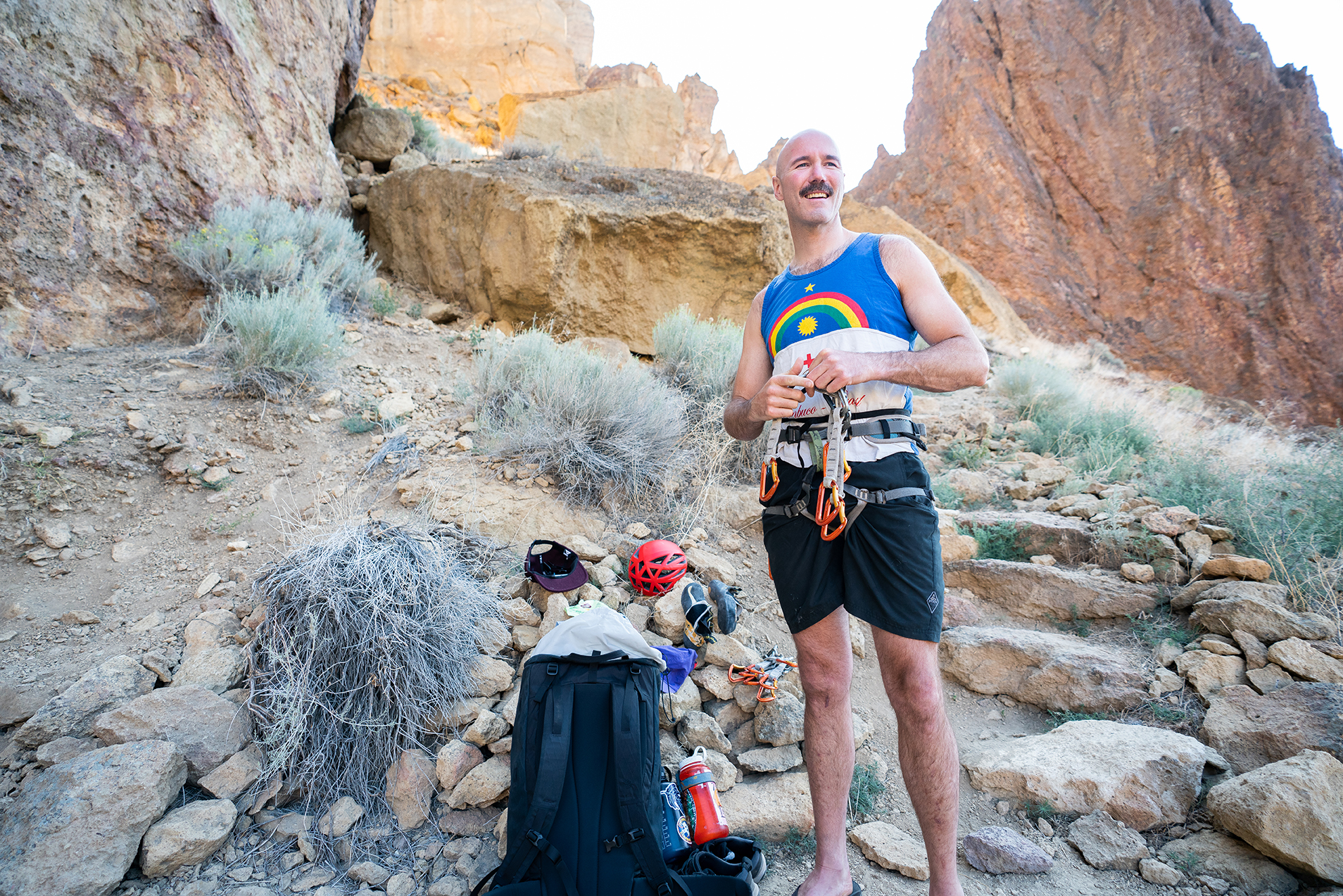 Back home, Cheney is one of our talented winemakers overseeing the daily ins and outs that are required to create our delicious wines. Here in the central Oregon outback, Cheney is one of the many outdoor enthusiasts. What better place to take all that enthusiasm than to the birthplace of U.S. sport climbing, Smith Rock? We walked down the trail and crossed over the Crooked River Bridge. Just a hop, skip, and a jump, and we were at our first stop; The Morning Glory Wall. As I watched with a confused look on my face at the knot tying and climbing doodad organizing, I asked Cheney how he got into climbing. He said “Climbing was 2007. I was trying to get into whitewater rafting, but couldn’t afford it. My grad school roommate took me climbing. I was hooked. It was my only sport for a decade.” 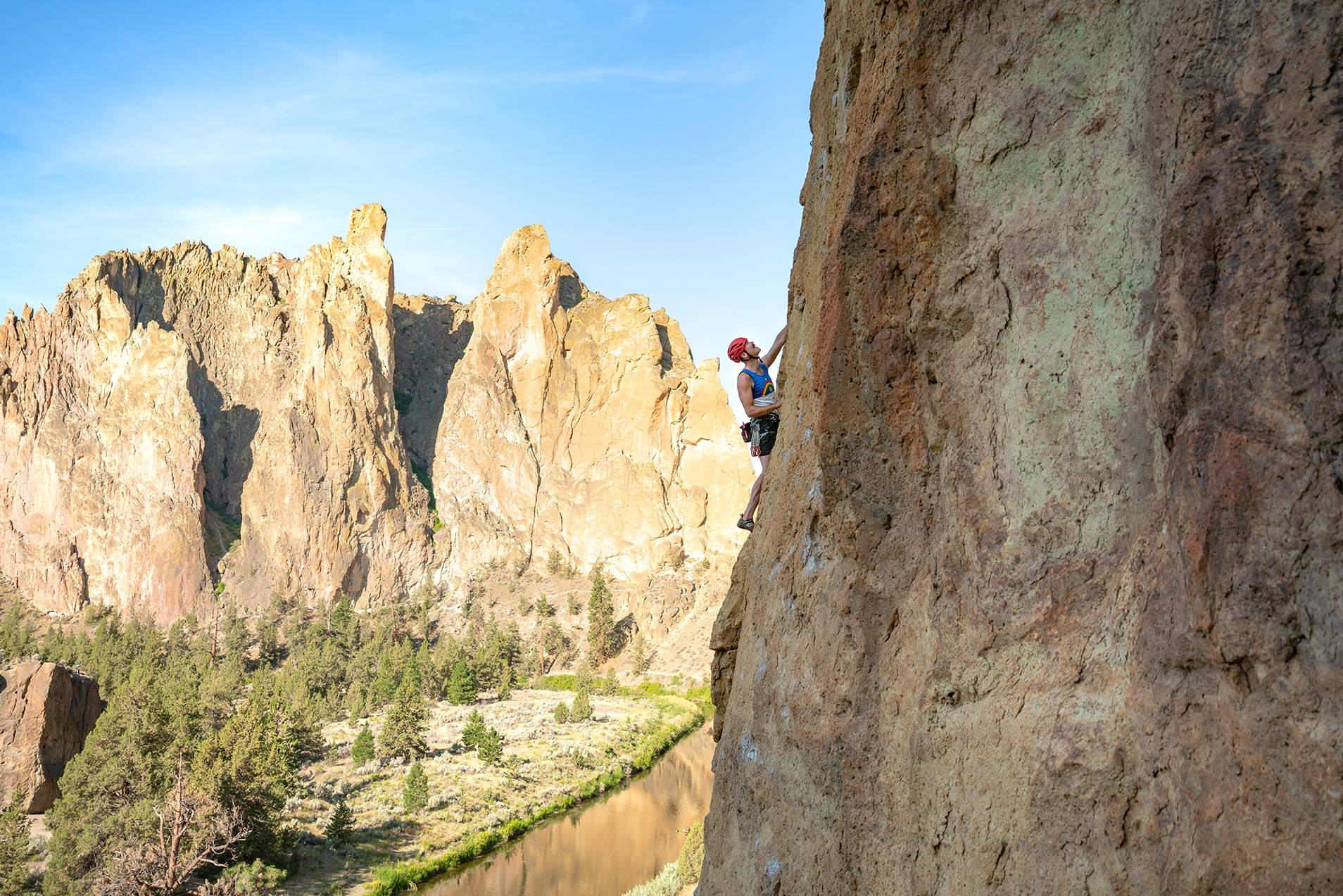 As I watched Cheney and his rock scaling comrades go up and down the old lava wall, I was mesmerized. It was a beautiful way to start the morning. As the sun snuck over the edge of the peaks, the temperatures slowly but surely began to creep up. Luckily, we had a few (low alcohol) Riesling Radler’s and Strawberry Coolers to bring the internal temps down. The temps climbed higher and faster than anyone rigged up, so we decided it was time to pack up and head to the water. 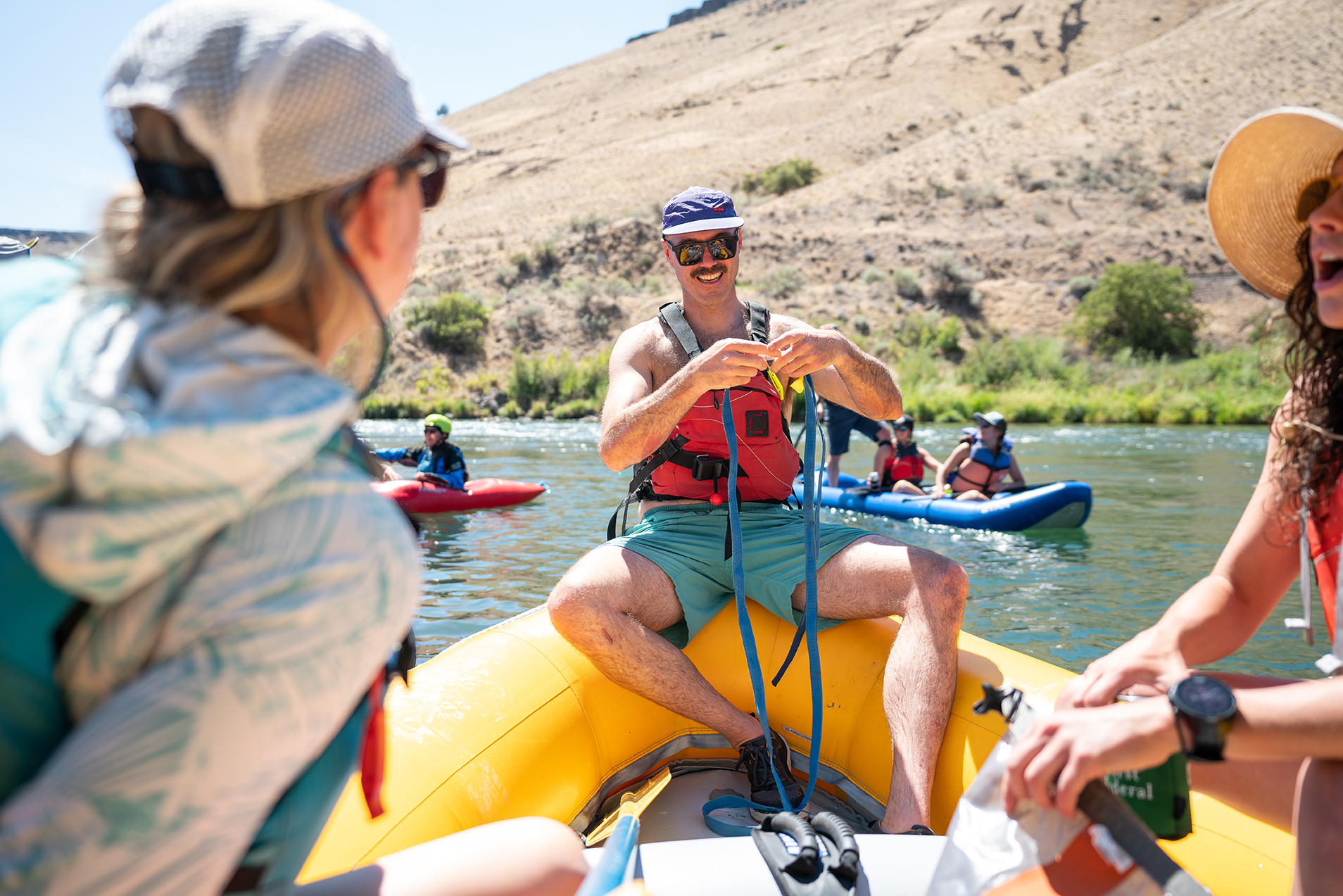 An hour and 20-minute drive took us to the town of Maupin, Oregon. It was time to inflate the rafts, dish out the life vests, and sink the drag bag (the best way to keep those wine cans cold). We met up with some more of Cheney’s outdoor rec squad. After introductions were made and vessels were chosen, we launched. The cold Deschutes waters have never felt better than on this hot July day. After making sure my life jacket would probably keep me afloat, I figured it was time to ask Raft Captain Cheney some more adventure life questions. “So, when did you get this raft?” I asked, as I dangled one leg over the side and attempted my smoothest paddle. Cheney looked up, smiled, and said “I started rafting/whitewater kayaking in 2018. That’s when I essentially won the lottery: The Grand Canyon permit lottery.” For those that are unfamiliar, this is an incredibly lucky permit to draw. Cheney definitely has some good sportsman’s karma. With an even bigger smile and chuckle, he continues. “I didn’t think I would pick up a permit for years. I immediately bought a boat and forced my river friends to show me their ways.” We continued down the winding river with the sun to our backs and Cheney having us paddle “right side forward” or “left side back.” Everything was warm, calm, and serene. That all quickly changed once we hit some large rapids and a few folks, (including myself), went flying out of the raft. Laughing and swimming back to the yellow point of safety, we continued on our way. I looked back at the end of the boat just in time to catch a can of wine tossed over from our fearless captain. Not a bad way to cool down. After some hours of floating, paddling, bailing, and boat trading, we made it to the end of our river trip. We aired down the rafts and piled into Cheney and his girlfriend’s Anaïs’ Sprinter to take us back to our vehicles. It was time to make camp, and more importantly, make dinner. 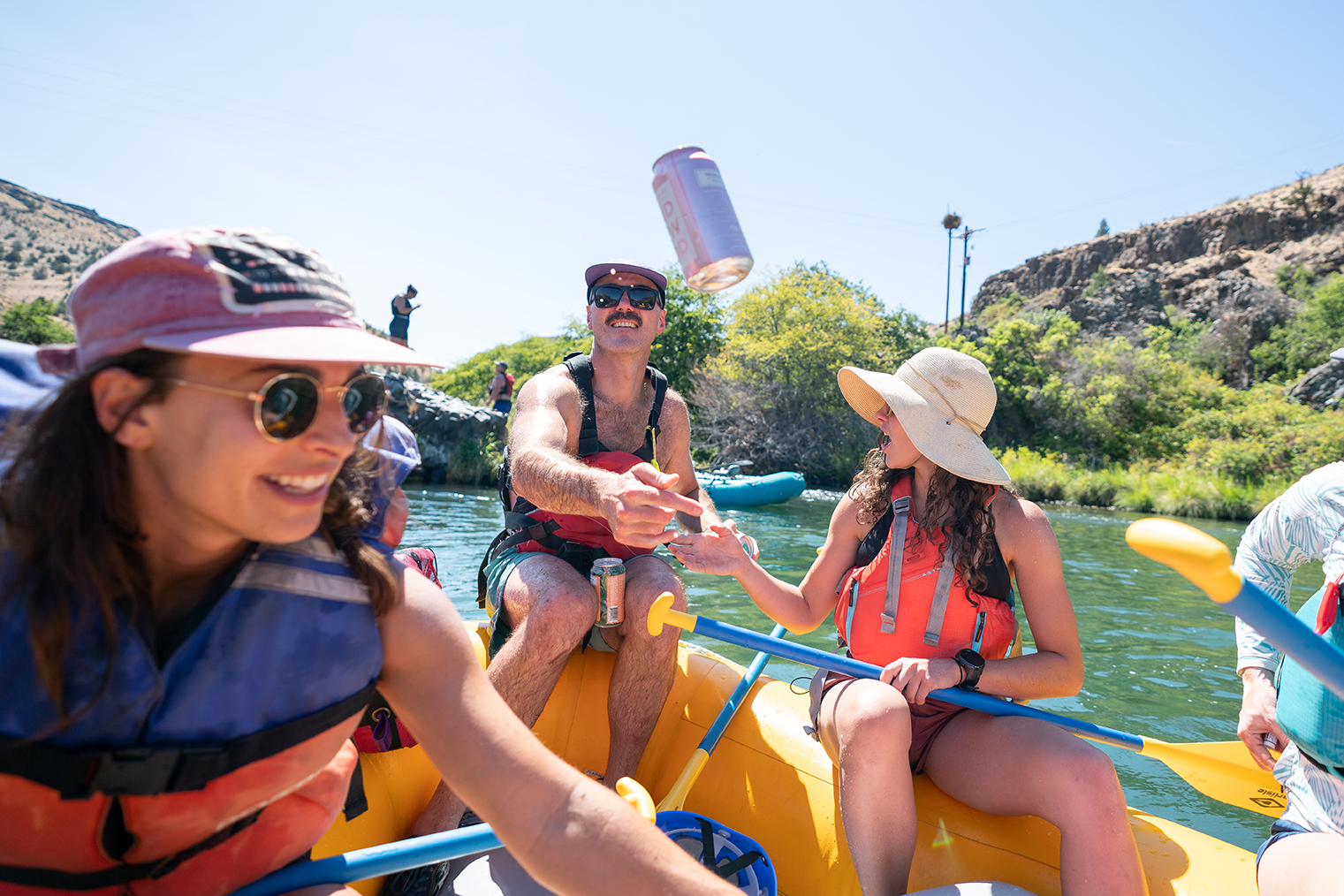 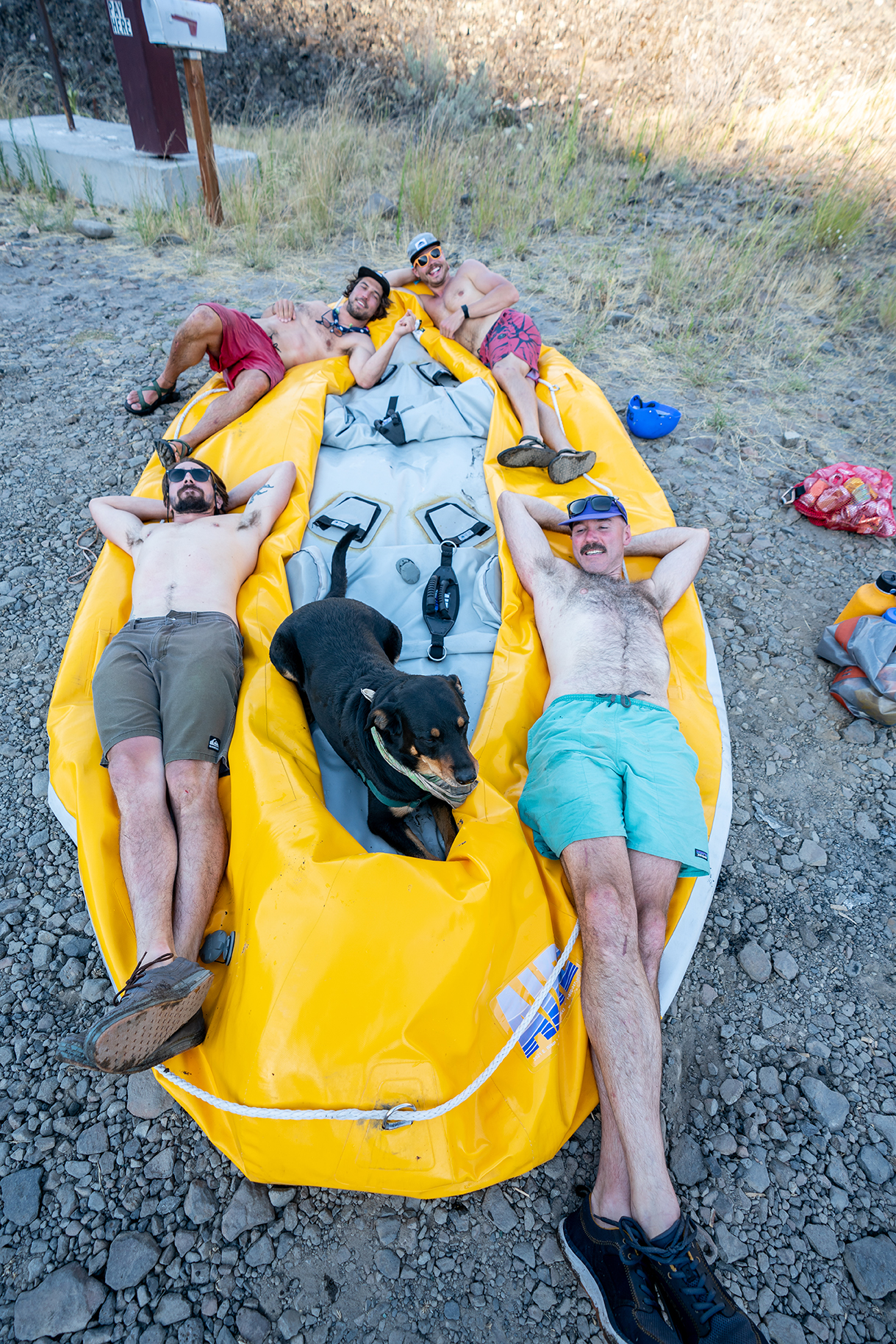 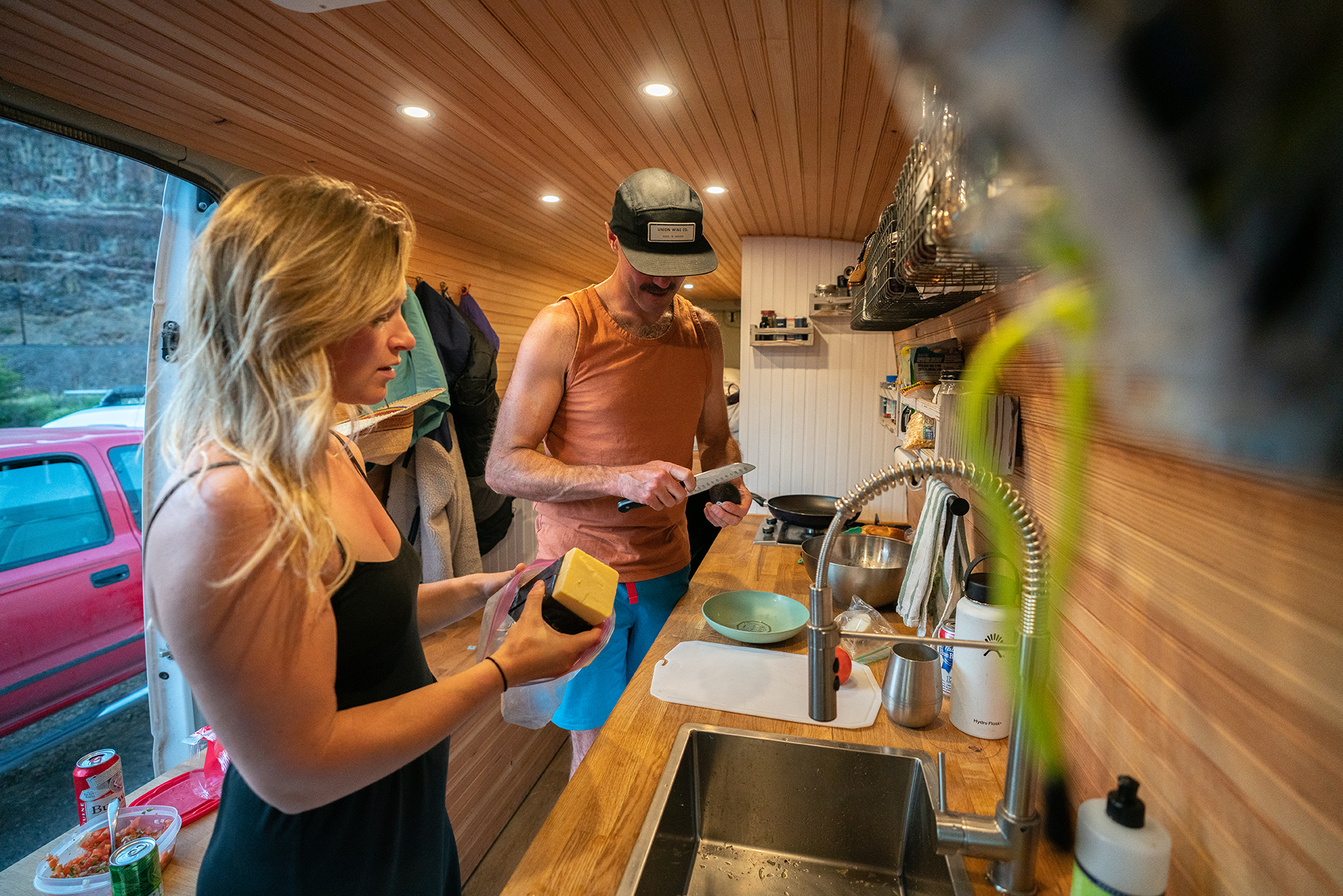 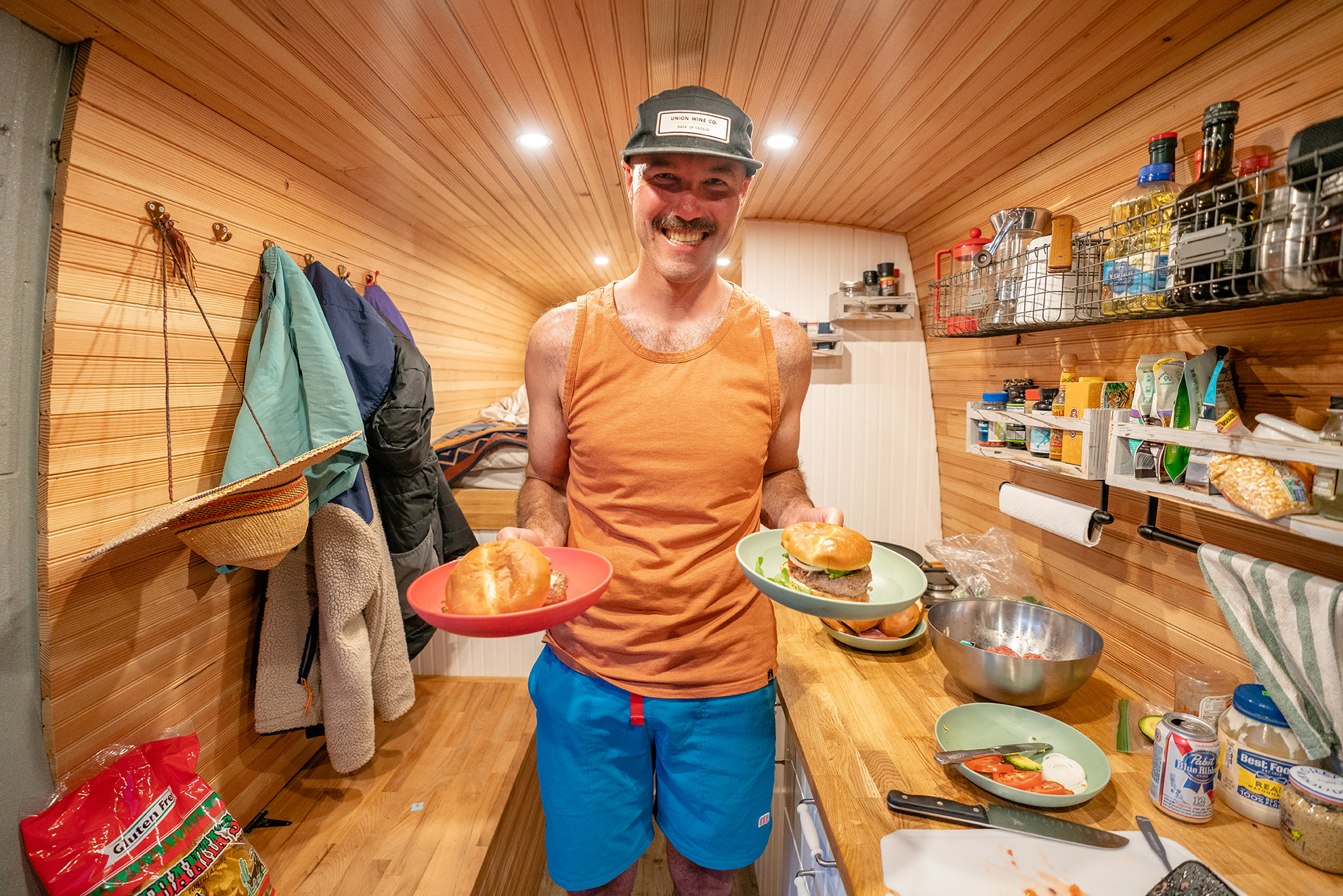 Day two. After a beautiful night spent under the Milky Way with Cheney and Co., we packed the rigs to head to our third adventure. Mountain biking down Mt. Hood. We took the back road through Tygh Valley and headed to Timberline Lodge. Once there, we found some parking for all the adventure mobiles. Cheney and Anaïs have a sprinter that they travel to all their adventures in, but it’s more like an REI on wheels. Complete with a kitchen, sink, and mini garage under the sleeping quarters. While assembling his mountain bike and dawning more protection gear than I saw in the last Batman flick, I hovered nearby. My curiosity must have been written on my face. Cheney leans over and says “Mountain Biking started in 2017. After years of many of my friends nagging me to buy a bike. I fought it because I didn’t want to climb less or hurt myself. I’m glad I finally gave in. It is the best!” It was time get off this mountain. Sophie, their trusty dog, joined in for the mountain run. We raced down the road to meet up with the two-wheeled human batteries at the halfway point. There were a few fun jumps that were hit with significant speed. There’s a saying in the mountain biking community; “the slower you go, the more likely it is you’ll crash.” Apparently, that is the truth because they were flying. 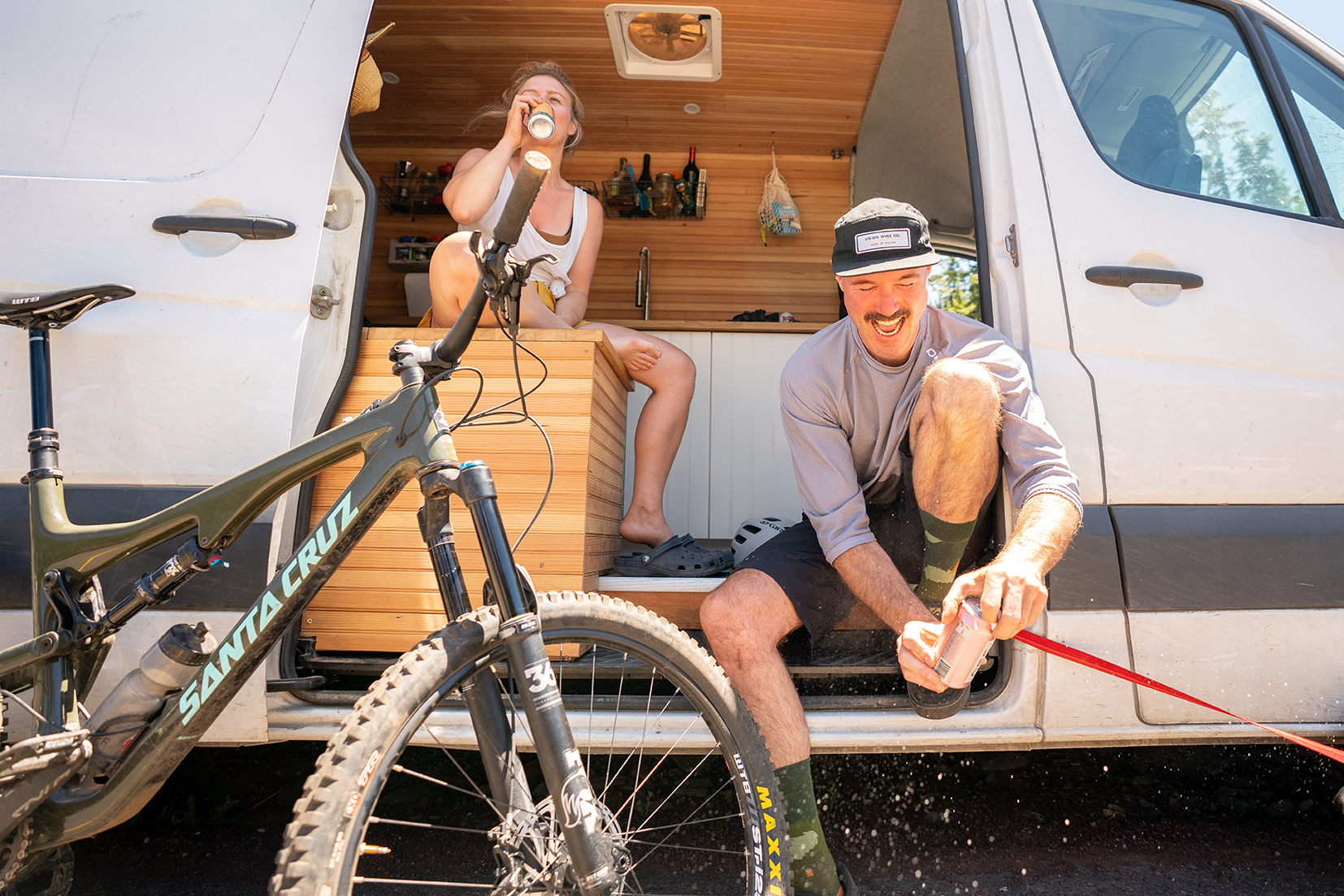 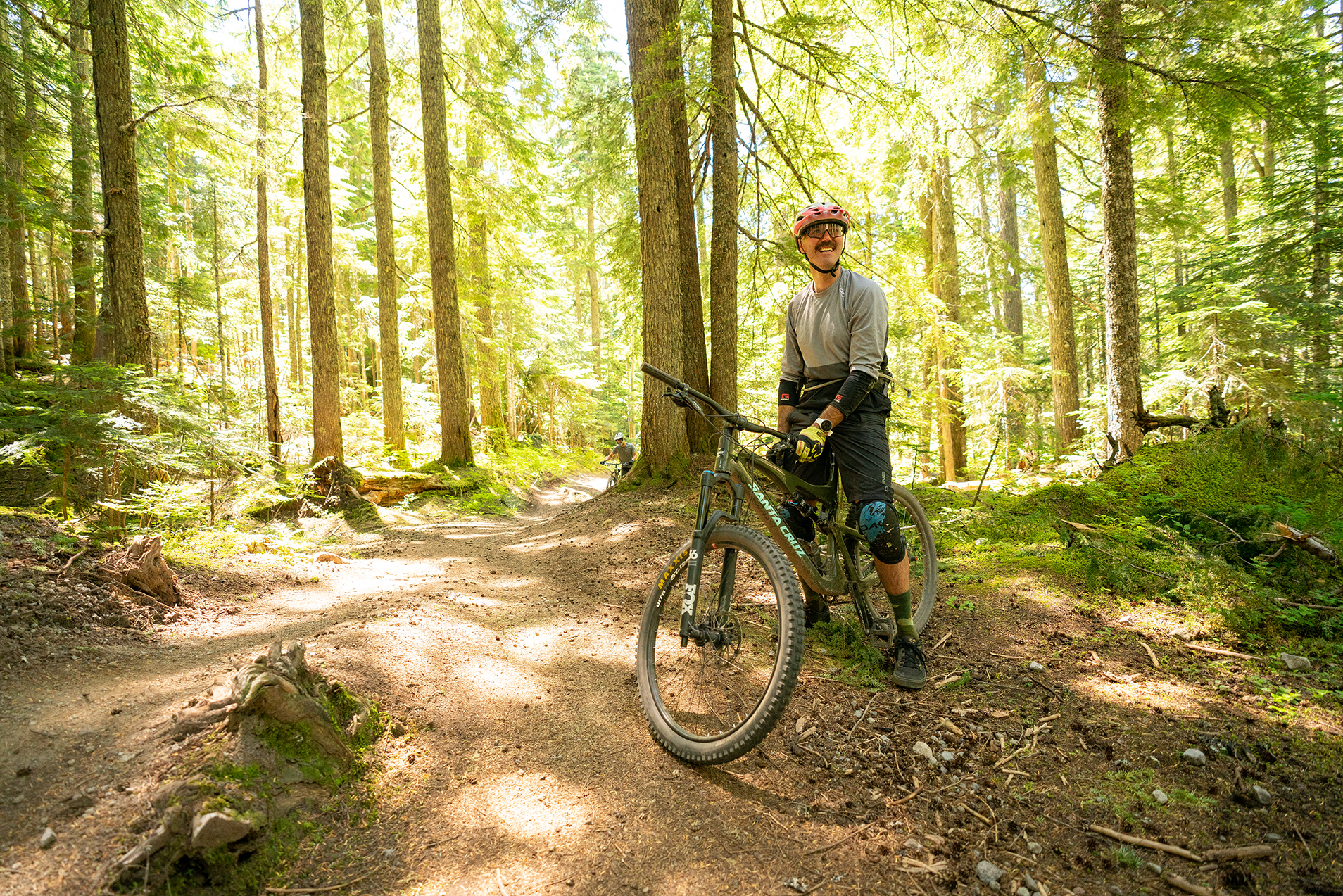 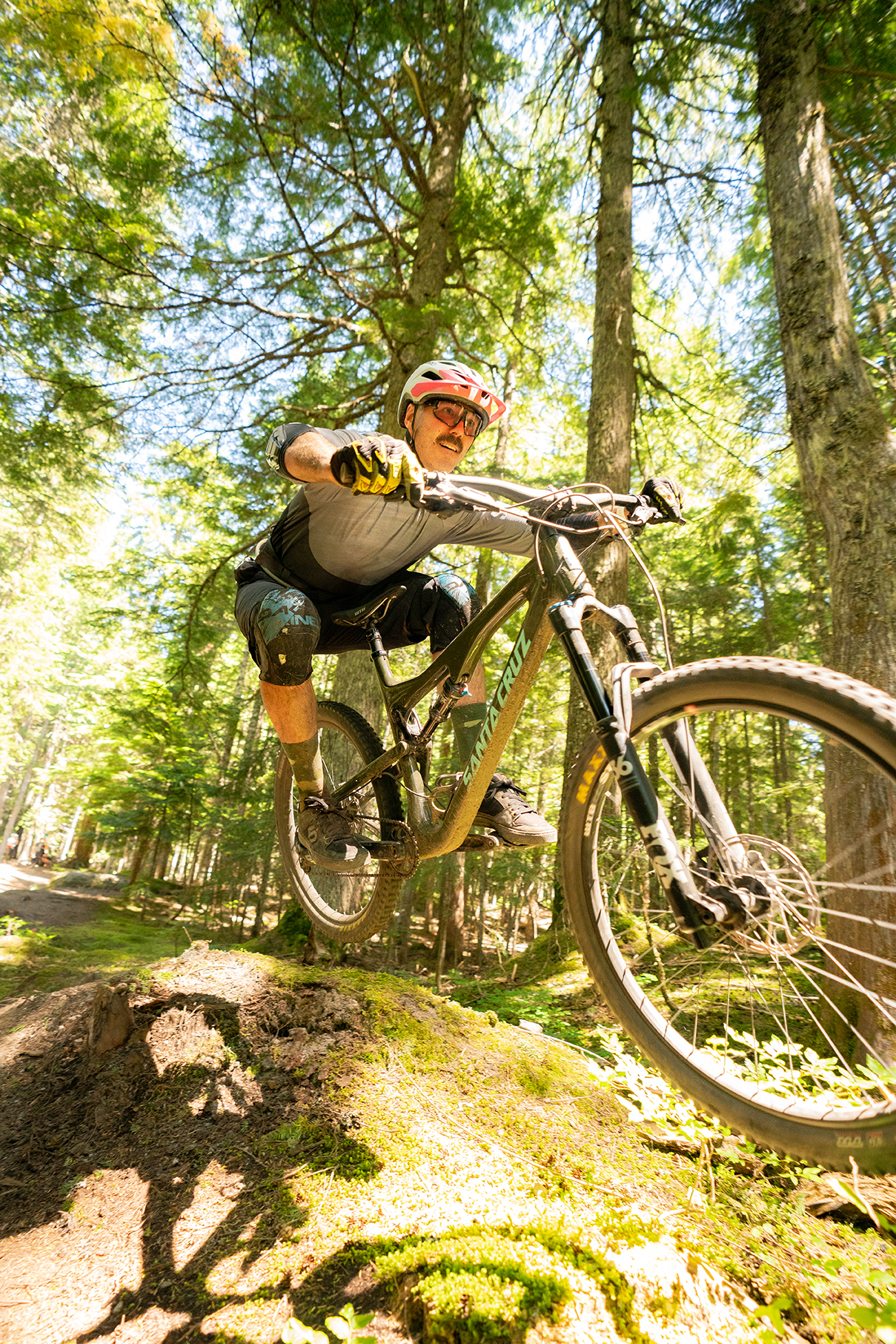 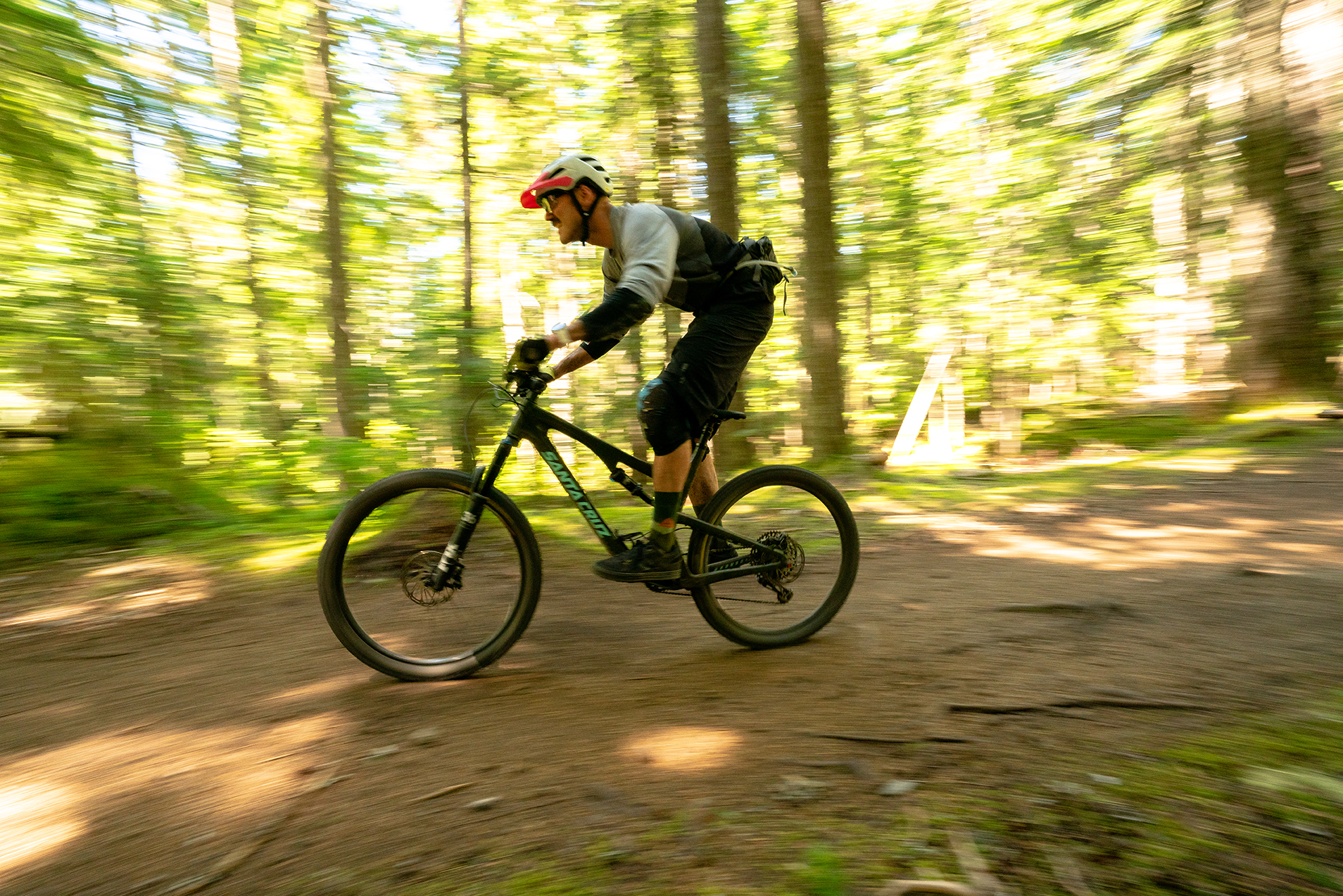 After all that adventure, the squad met up at the Government Camp Dairy Queen for some cold treats. It was a weekend for the books to say the least. Gravity was tested in a number of different forms. We flowed with and fell into some of the most beautiful waters the state has to offer. Whether you’re cracking cans under the Milky Way or sipping cold wine coolers from a raft, Oregon is one hell of a state. Remember to stay safe out there. Abide by the rules and respect your fellow humans. We’re all in this together. Let’s try to see as much beauty as we can. Until next time. 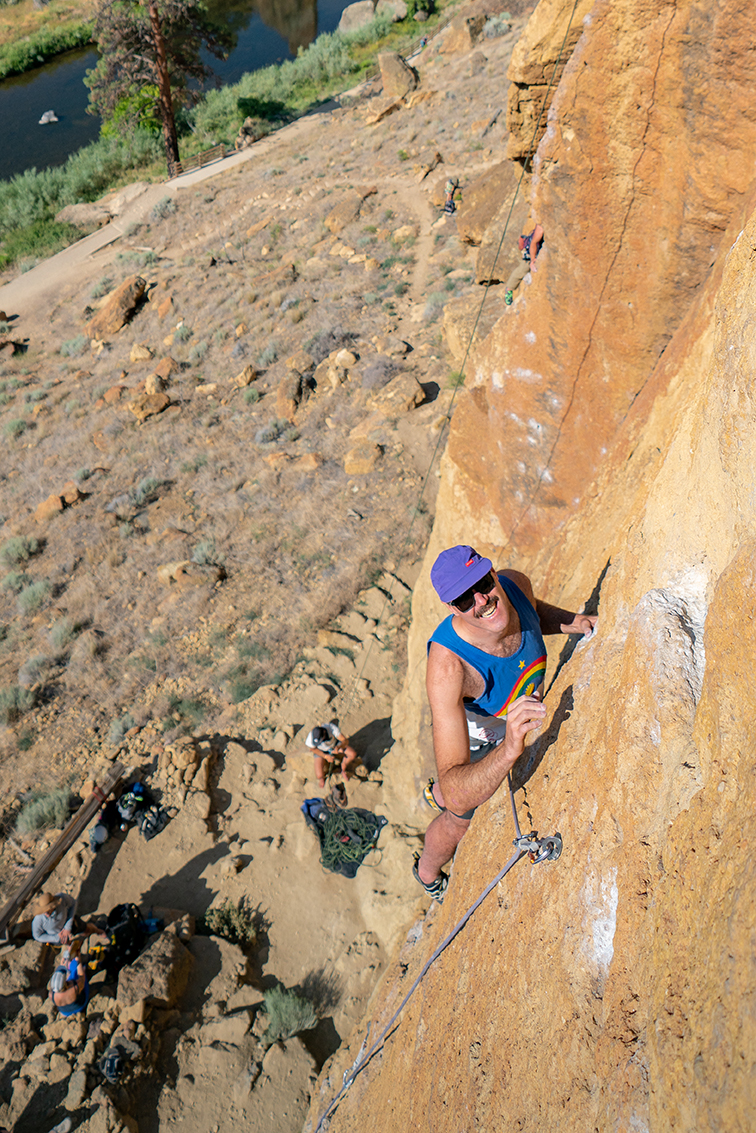